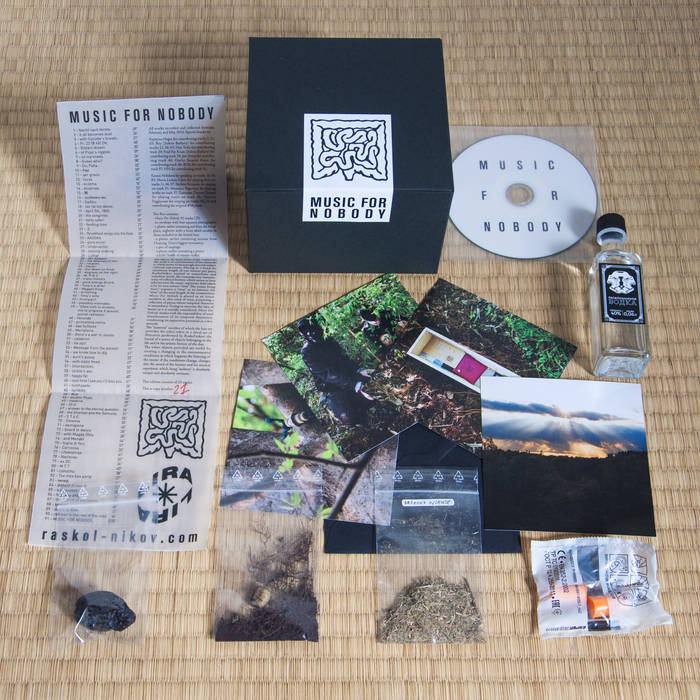 The idea at the basis of the music realized for this work is an extremization of the immediacy which seems to increasingly pervade today's cultural enjoyment. Placing as a bond the maximum length of one minute per piece, Raskol’nikov wanted to exacerbate, and somehow mock, the contemporary instantaneity of cultural fruition which seems to have infected even the music, expressive field which is by its own nature "time". The music, being "time", requires a "time" to its listener, the "time" of the total length of the composition. Music For Nobody is placed as an ironic antidote to this need of time, proposing a collection of pieces whose temporal character is immediacy. Trying to exorcize the idea of music as it is usually considered, Music For Nobody clashes with the impossibility of total abandonment of its temporal dimension, condensing its expressive potential in a few seconds.

The physical version of this album was realized as a part of a box-set which contains also the relics of a ritual act of liberation performed by Raskol'nikov: the burial of a series of objects belonging to the life and to the artistic history of the duo. The box also provided some tools useful for creating a changing in the environmental conditions in which happens the listening of the music: if the conditions change, changes also the mood of the listener and his musical experience, which, being "auditory" is absolutely unique and absolutely intimate.

Bandcamp Daily  your guide to the world of Bandcamp

Guest hosted by Tamar Osbourn aka Collocutor and Toshio Matsuura.